×
Garth has, without any doubt, taken place in my life for several decades, when I have discovered in the French editor Aredit Artima (unfortunately closed since this period) in the 1970's. First, I have created several fanzines in the 1990's (only seen by my friends), Then, I have started to build my first blog made of 3 pages in 2001, which didn't mark the period.
In 2009, i worked on the construction V2, which was a still modest blog and which disappeared five months after because my work did not suit to me (I must say that my English friends did not have the idea to put online the adventures of this character, and I spent hours looking for a site dedicated to him unsuccessfully).
At last, 2012 i have created the version 3 of the site because in the meantime, I had learnt to build sites with this wonderful software Incomedia website X5, which nowadays, has increased to version 12. This has helped me a lot in my work, so here is the version 4 of the site, put on line in October 2015. I Hope you'll enjoy. - the creator of the site : wacoh05 - 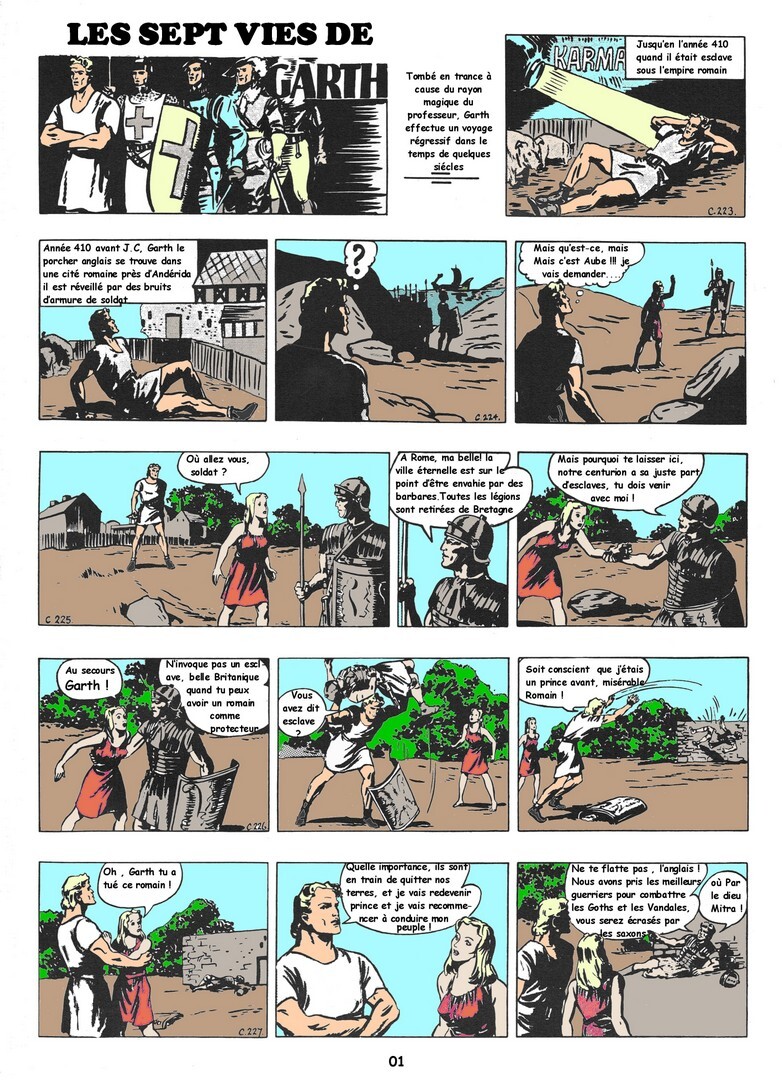 My favorite character of comic strips, mostly the Stephen Philip Dowling period, the one who has created in 1943, in england, this atypical character (with Gordon Boshell), as strong as Hercule and very resourceful (in fact muscles and brain).
The adventures of Garth have had several comics strip writers, (John Allard, Frank Bellamy and Martin Asbury) and have been published as strips in the Daily Mirror until 1977.
They have been colorized and republished since 2011 in this newspaper, (this time as 2 strips a day).
Garth is a character who travels in time, or by the reincarnation, or by the way of a cape and a helmet, or time machines, further to a blow on his head or even when he’s asleep. His adventures are a mix of science-fiction, fantasy (*), romances, and intrigues with new development.
This character is awesome because he has not any super power, he just can count on his colossal strength and his imagination.
At his second adventure he meets the Professor Jules Lumière, a french man who is a genius, and who will be in nearly all adventures of the hero.
The creator Stephen Philip Dowling, (also known as Steve Dowling) with his « naive » drawing, takes us in adventures who last for months (one strip a day in the Daily Mirror). For example, « the seven ages of garth » : 16 months.
And surprising fact for that time, there are a lot of charming and nearly naked female characters, who have been retouched in several countries…

Copyright 2015. All rights reserved.
Back to content | Back to main menu